All About Cambridge Masks

The Cambridge Mask Pro is a fashion focused pollution masks that come in a range of patterns and 5 sizes to fit children and adults. The masks have a wide range of uses and are often used by cyclists, urban residents, respiratory disease sufferers and anyone wanting to reduce exposure to potentially harmful pollutants.

The Cambridge Masks™ are respirators (PPE) with UK military grade filtration technology.
The masks filter out dust and pollution particles such as PM10, PM2.5 and PM0.3 as well as bacteria and viruses using a unique triple layer filtration system. The first layer catches larger pollution particles such as dust and PM10, followed by the Three-Ply Micro Particulate Filter which stops nearly 100% of smaller particulate matter such as PM2.5 and PM0.3. The final layer has been developed by the UK’s Ministry of Defence and filters out viruses, bacteria and gas pollution such as Volatile Organic Compounds (VOCs), Ozone, Benzathine and Formaldehyde.
We call this The British Pollution Solution.

As you can see from the diagram, Cambridge Masks filter air through three different layers

The first layer of our mask filters out larger particles such as dust and PM10. The material is sublimation printed in different patterns to make the masks fashion friendly.

Dye-sublimation printing uses digital technology that works with polyester and polymer-coated substrates. Our unique sublimation dyes are transferred to special paper via liquid gel ink through piezoelectric print heads. Using heat and pressure the dye is then transferred into the fabric. The end result fuses the dye to the textile on a molecular level, meaning it cannot be removed from washing. When dye is only applied to the surface of the textile or material to be printed, it can be removed from wear or washing, which we avoid with this technique.

The second layer of the mask blocks particulates such as PM2.5. It also filters 99.79%+ of particles as small as PM0.3. The textile is a three-ply non-woven melt-blow polypropylene, a thermoplastic polymer used in a range of applications. The blow moulding process begins with melting down the polymer and forming it into a “parison” – a ball of liquid. High velocity air is then passed through to attenuate the filaments and create a fibrous web. The random fibre orientation this triggers is advantageous because it creates a better mesh to trap particles. The textile is also created with a high surface area, meaning a greater percentage of particulates are captured as they pass through the filter.

Unlike the Basic Mask, our Pro Mask is completed with the inner filter which is made from a 100% pure activated carbon cloth, which was originally invented by the UK Ministry of Defence. It was then extensively developed and made into a product for use in chemical, biological and nuclear warfare protection, of the type used by armed forces around the world. We hold the exclusive global rights for this material for use in a consumer pollution mask. You won’t find it in any other mask outside of the military.

All activated carbons – traditionally powders and granules – generate “Van der Waal” forces due to their porous structure. These forces give activated carbons their unique potential to adsorb gaseous molecules, including anions and cations into their internal pores.

Our filter material is comprised of a series of activated carbon filaments, each about 2,000 nanometres in diameter. Each filament is many times smaller than the typical grain size in standard carbon materials, making the rate of adsorption of pollutant gas much faster and therefore more powerful. It also means that bacteria and viruses are drawn to the filament surface much more efficiently, because there is so much more available surface than in a granular carbon.

The high number of filaments – spun into a yarn and then woven into cloth – makes the speed of adsorption extremely fast in a material that is still easy to breathe through. Not only are molecules such as pollutant gases and endotoxins quickly adsorbed into the pores from a much wider area, but the Van der Waals forces also attract and immobilize on the filament surface much larger particles including bacteria, which often have a negatively charged membrane. Together with the anti-bacterial silver added to the filament surface, the activated carbon cloth traps the bacteria and draws out the gel-like cytoplasm inside – killing it and preventing infection.

Cambridge Masks are therefore powerful respirators that not only clear the air of pollution via the particulate filter, but also remove potentially harmful gases and pathogens with the additional carbon filter

The Cambridge Mask PRO meet a wide range of tests to ensure they are effective and safe to use for the whole family.

Cambridge Masks are fashion-forward, reusable, personal protective masks that come in a range of patterns and 5 sizes to fit children and adults. Masks are available in Extra Small, Small, Medium, Large, and Extra Large. Cambridge Masks have an adjustable nose-clip and toggles on the chin so that you may tighten and loosen the mask to achieve a perfect seal.

Human faces come in all different shapes and sizes which can make getting the right fit a challenge. However, taking careful measurements is an essential step when selecting your mask as the correct fit is imperative for perfect filtration.

Our Recommended Means of Measurement

It is by using measuring tape. 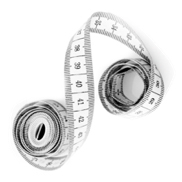 This means of measurement is for all ages and we strongly recommend this way for its highly accurate way of ensuring your purchase will fit.

Step One
Using a tape measure, measure from the mid-point of your nose to just over an inch under your chin, this would be your reference for the first number on our size chart. 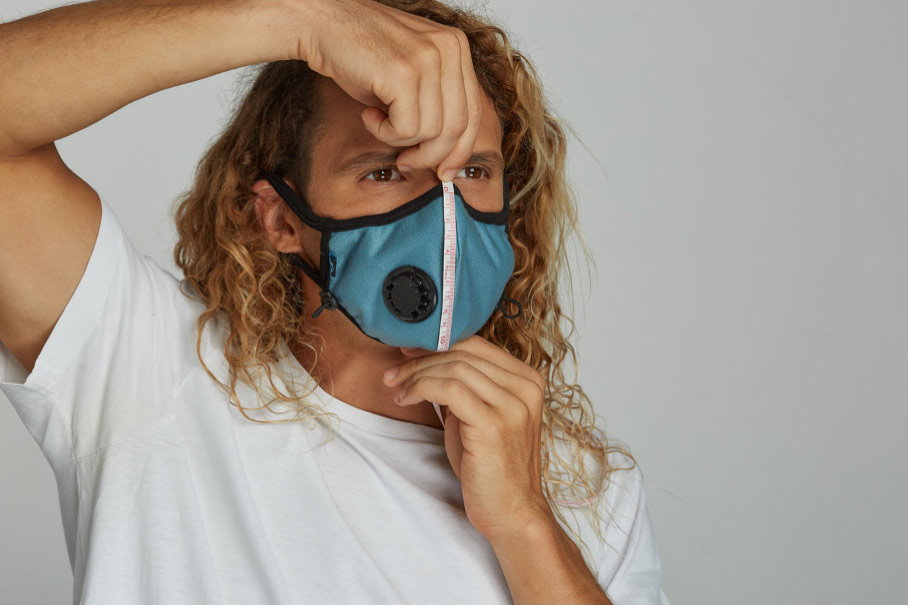 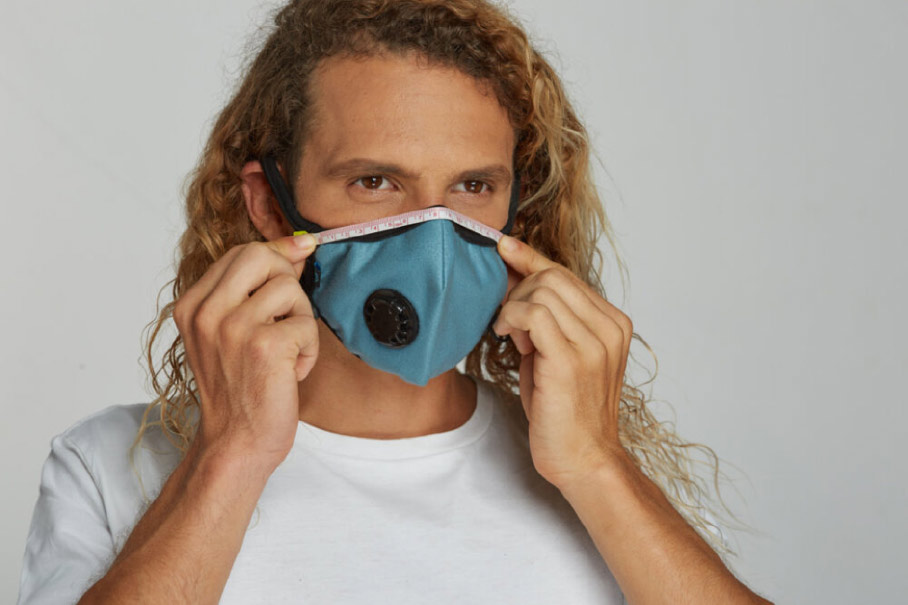 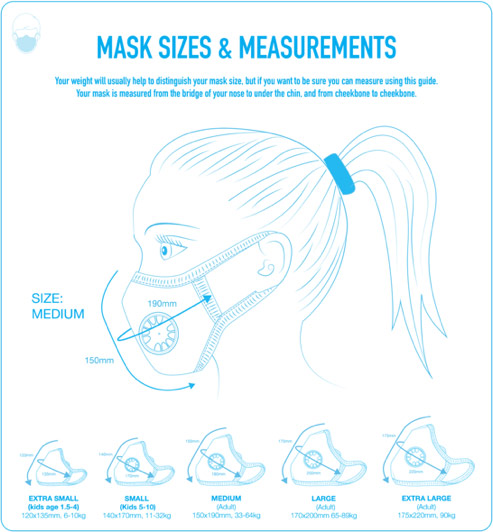 Lifetime of the Mask

The Cambridge Mask works by using a three layer filtration system to block the entry of particulates into the respiratory tract, simultaneously blocking entry of bacteria and viruses.

Please refer to the table for usage guidance which outlines how long the masks should be worn for before replacement in different environments. The masks need replacing after use in a polluted environment as the filter becomes clogged with particles. We recommend checking the air quality is like in your area (a search for AQI (air quality index) in your locality should give this information).

To ensure your mask works effectively we recommend replacing the mask regularly as per guidelines. For example, for sensitive groups in moderate/ unhealthy air quality this would be after 340 hours of use.

Cambridge Masks‚ are non-disposable, meaning that you can use them for potentially 340 hours of active use, or 6 months of daily use during a commute or other activity. The length of time they are suitable for depends on how polluted the environment is when you use it. The table provided explains in more detail.

A general guideline is that you can use the masks on a regular basis for 3-6 months before it needs replacing. Once the mask is past its useful life a new mask is needed.

The valve works by opening when you exhale and closing when you inhale. The easiest way to see this in operation would be to look in the mirror and observe it opening and closing as you breathe.

We have made improvements to the valve to adjust the thickness of the inner membrane. This makes it easier for the valve to open and close at the exact time you are exhaling and inhaling.

The mask can be hand washed with soap and hot water. However, this will not extend the life of the filters as the pollution will be locked into them. As the whole mask is the filter, once it has reached its recommended total hours of use, a new mask is needed. Please do not machine wash or dry the mask.

All About äR Facemasks & Gloves

Be the first to find out about our newest offerings and hottest deals, and what’s new.

If goods have Problems

Be the first to find out about our newest offerings and hottest deals, and what’s new.
This website uses cookies to ensure you get the best experience on our website.

Any cookies that may not be particularly necessary for the website to function and is used specifically to collect user personal data via analytics, ads, other embedded contents are termed as non-necessary cookies. It is mandatory to procure user consent prior to running these cookies on your website.